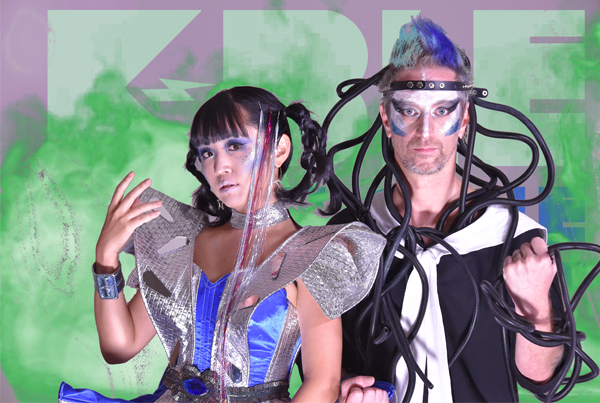 The lead-singer of K- ble Jungle, an extremely kawaii Japanese girl named ERIKO, started her career as an opera singer, with a solid classical music background from music schools in Japan and Italy. Surprisingly, in 2015 she extended her style and embraced J-pop and electronic music, thanks to the ear-catching production of DJ Shiru. DJ Shiru is the other half of the project; the Italian DJ has specialized in Japanese music and composes some of the songs of K-ble Jungle and raps and MCs on stage while Eriko sings. A new Japanese member since 2018, Shiori.co is the second voice and illustrator for the videos you will see during the concert.

Together, they have released two original CDs called “Oikakete Future” and “Erikottero”, with J-Pop and gothic songs, and two anisong cover CDs containing famous anime openings and endings, with their Japanese label. You can find their discography online on all digital stores, or at their concerts in physical release (there are different versions of the same songs online and on physical CDs, with some bonus tracks).

K- ble Jungle are currently showcasing their live performance throughout the world embracing a myriad of styles of dancing, costumes and visual projections, but most of all great songs, ranging from the electronic sounds of Akai Uta , to the J-Pop tune Oikakete Summer, from the J-rock guitars of Future to opera songs such as Con Te Partirò, a customized cover of Bocelli. The playlist of their concerts varies depending on the audience , but they always include their original songs , to which they often add anime songs and even traditional Japanese pieces. You will hardly see a more eclectic show, where acting and costumes, videos and audience-artists interactivity are as important as the music.

They regularly headline at major European festivals, appealing to mass audiences and conquering the media interest and feedback.

The K-ble Jungle will start their “Space People Punch Tour” in 2018 from the USA, with the exclusive concert in Honolulu, in collaboration with HIS tour operator. After the USA they are performing in Europe appearing in some of the largest festivals in Italy, Switzerland, and clubs from France to Germany. The tour will end in Japan with a series of summer concerts.