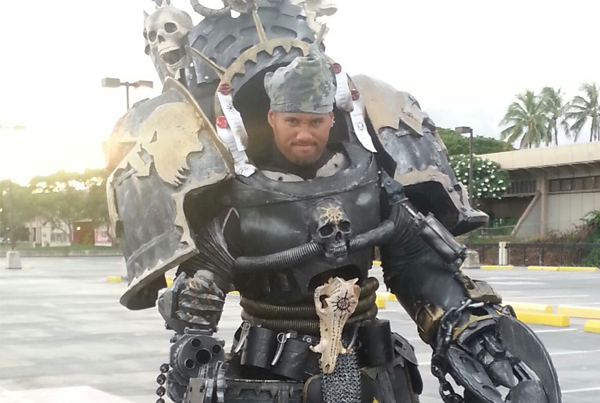 Native born Manu started expressing his artistic talent at the age 5 by building things with his hands. He was introduced into the medieval armor & life style by his mother who took him to a Ren fair.

About 16 years later, Manu joined up with a couple of historical reenactment groups one of which was the SCA in 2000. He quickly learned to make steel helmets & armor, garb leather work & wood work.

Manu jumped into mainstream cosplay in 2010 with his 1st costume “Mandalorian” which debuted at Kawaii Kon. Since then, he has made a dozen or so costumes such as: Scorpion, Vega, Halo Spartan Nobel 6, & his more recognized Chaos Terminator & Amphibian Mandalorin.

Working along side artist & indie film makers like Keoni M. to bring the star wars universe to life & Sam Campos to bring Pineappleman out of the comic books into the real world & Kamen rider story a new storyline. He specialized in the cosplay stunt life of taking the costume into the active world we live in, like climbing the chaos terminator up a mountain or my amphibian into the sea.

Manu is always looking for that extra touch to push the envelope that is cosplaying.