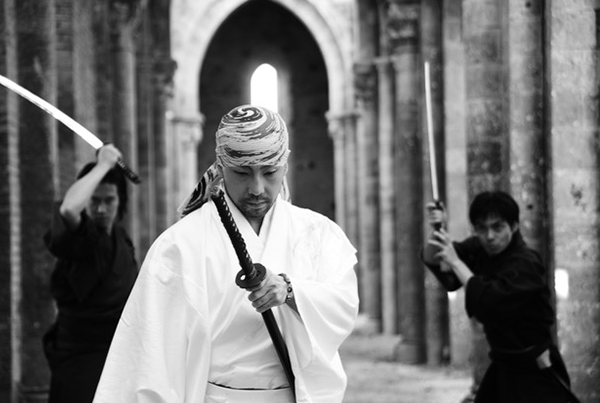 Tetsuro Shimaguchi was born in Saitama prefecture in Japan and graduated from Nihon University College of Arts.
After extensive experience in kabuki and other theater, he established and leads “Kengishu Kamui”. He is a “Samurai Sword Artist” pursuing mixed styles such as beauty of form, acting, and martial arts.

One of his major accomplishments as an actor was performing as Crazy 88’s “MIKI”, as well as directing the choreography in “KILL BILL Vol. 1” a film by Quentin Tarantino.

This movie was ranked #1 in Feb 2017 by Collider website of “The Best Fight Scenes of the 21st Century”
The following is a quote from the article.
“This ain’t just one of the greats of the 21st century; it’s one of the best fight scenes of all time.
Every single fight in Kill Bill Vol. 1 is pretty much a masterpiece. Tarantino recruited legendary martial arts choreographer Yuen Woo-ping and sword fight choreographer Tetsuro Shimaguchi, for the film and the results are the kind that go down in movie history.”

After the success of KILL BILL, KAMUI has had rave reviews at performances internationally:
The Kennedy Center (U.S.A. /in 2005), Europe Tours including Teatro Della Pergola, Palazzo Vecchio (Italy /in 2010), Hermitage Museum (Russia/in 2015) and many other European countries, and also Armani Hotel (Dubai/2016), dinner shows in Blue Note etc.

In 2012, he established the original samurai dojo, “Kengido” and he’s been expanding it not only in Japan but also in many other countries such as Italy, Poland, U.S.A. and Republic of Lithuania etc while he protects and promotes the Samurai culture.