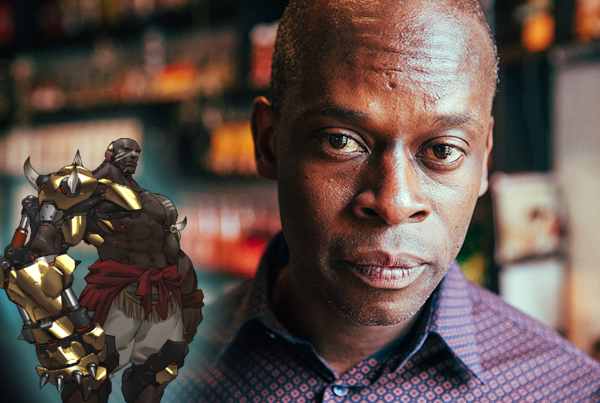 While much of the world knows him as the voice of ‘Doomfist’ in the Blizzard Entertainment game, OVERWATCH, multifaceted actor and performer SAHR has also been nominated for a Tony Award for FELA! on Broadway and starred on ABC’s THE LAST RESORT.

SAHR began his career in theatre, working in Atlanta with the Freddie Hendricks Youth Ensemble of Atlanta.

As an actor, SAHR has had a rich career from the early age of 15 and has worked with the likes of Gerrit Timmers in Rotterdam; Falk Richter in Berlin; Del Hamilton and Tim Habeger in Atlanta; Walter Chakela in Johannesburg; and Made n da Shade/MC in Amsterdam. You can currently see SAHR in his recurring role of ‘Anansi’ on Netflix’s LUKE CAGE.

SAHR has also maintained a presence in the world of film since the late 1990s, with appearances in Passing Glory, A Lesson Before Dying, The Signal, Stomp the Yard and Blood Done Sign My Name, among other films.

SAHR is a M.A. graduate of DASARTS, and in Amsterdam he earned an Obie Award in 2009 for creating the role of Anikulapo-Kuti when Fela! premiered Off-Broadway at 37 Arts in 2008. He subsequently repeated his work on Broadway in 2009, as well as in London and in a special Nigerian engagement of the musical. Fela! earned 11 of the 12 possible Tony nominations, including one for SAHR as Best Actor in a Leading Role. Among his other awards and recognitions are winning a 2012 Helen Hayes Award and 2012 Toronto Critics’ Award; earning a 2010 Obie Award; plus receiving a 2009 Lucille Lortel Award and a 2009 Drama Desk Award.